Horseradish in the Community

Home / News / Horseradish in the Community

During the past few months, team Horseradish have been taking part in Chester Race Company’s ‘Project 1000’ initiative. This is the second year that we have participated in the project, working in the local community and donating over 1,000 hours of Race Company staff resource and expertise.

As part of our committed hours, we deployed a team to assist at the West Cheshire Food Bank, Chester, where they helped to organize and sort through the many donations. The project, funded by local churches and community groups, aims to provide nutritionally balanced emergency food and support to local people referred to the charity in crisis. The charity is part of a wider network of foodbanks, working towards the regional objective of combating poverty and hunger across the UK.

A team of four helped sort through tins of beans, soup and pasta then distributed deliveries to refugees and homeless people across the local area.

Angus Wilson, Head of Catering at Horseradish said “We are committed to supporting charities, particularly those aimed at helping the local community. As part of our promised commitment, we are so pleased have helped the food bank. The work undertaken has been both rewarding for those on the receiving end and our employees, who have gained a real sense of satisfaction from being able to help out their local community.”

The commitment from Chester Race Company to dedicate a full day’s volunteering for each of its full-time employees, across 10 separate local charities has been a success and has not only benefited the charities involved but has had a positive impact on the volunteers too and has inspired some to continue to work with them into the future. 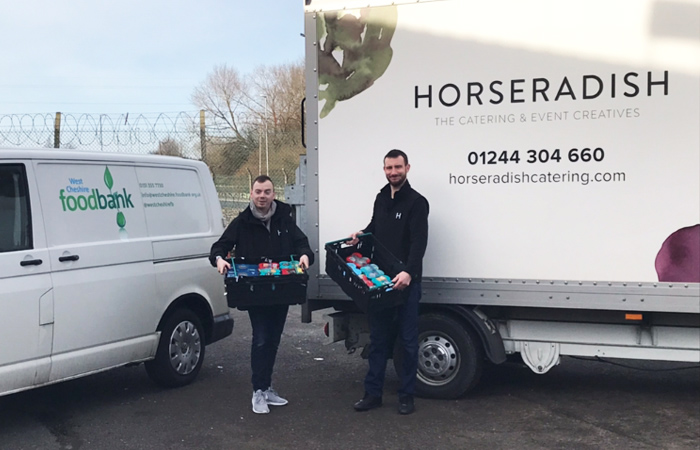